ARCs from across the North collaborated on an influential piece of work which has been backed by MPs, highlighting the challenges and inequalities that children living in the North of England face, compared to their peers in other parts of the country.

The ‘Child of the North’ report has been jointly produced by the Northern Health Science Alliance (NHSA) and leading academics from the NIHR Applied Research Collaborations for the North East and North Cumbria, North West Coast, Greater Manchester and Yorkshire and Humber. It was part-funded by Research England and the N8 Research Partnership.

Its lead authors hosted a parliamentary launch in March 2022, alongside N8 Partnership colleagues, who co-funded the research.

In the lead up to the launch, MPs discussed the Child of the North Report in a Westminister Hall Debate, led by Liz Twist, MP for Blaydon, Tyne & Wear – where she described the work as a ‘major new report’ and explained that it shows the many ways that regional inequality blights the lives of children and adults, including through higher levels of poverty, poorer educational attainment, higher levels of infant mortality, lower life expectancy and worse mental health outcomes.

You can read a transcript of the full debate and comments, here

More than 15 MPs attended the launch

The report’s lead authors Professor David Taylor-Robinson (ARC North West Coast) and Professor Kate Pickett (ARC Yorkshire and Humber) spoke about its key findings, including the troubling picture of child poverty in the North compared to the rest of the country and how this has worsened during the pandemic.

They urged MPs to amplify the findings of the report and work together to drive real change, calling on policy makers to invest in young people now or else have society as a whole face the consequences in years to come.

“For too long, a lack of investment in key services in the North have meant that our children have suffered disproportionately. They are more likely to suffer ill health, to have lower educational attainment, and to live in care or poverty. The Covid-19 pandemic has worsened these inequalities and it will cast a long shadow across generations unless we act now.”

Professor Kate Pickett from the ARC Yorkshire and Humber added: “Levelling up for the North must be as much about building resilience and opportunities for the Covid generation and for future children as it is about building roads, railways and bridges. But the positive message of this report is that investment in children creates high returns and benefits for society as a whole.”

Professor David Taylor Robinson from the ARC North West Coast said: “Children growing up in the North of England get a bad deal. Due to poverty and lack of investment, their outcomes are worse across the board – from risk of death in childhood, to obesity, mental health, and education, and the pandemic has made the situation worse. The stark inequalities exposed in our report are preventable and unfair. Levelling up must begin with better policies for children.”

Dr Luke Munford from the ARC Greater Manchester added: “The report shows us that without significant, properly-funded measures to tackle the entrenched inequalities experienced by children in the North of England, from birth, there will be no levelling up in the country.”

What does the report cover?

The report looks at a wide range of factors, from child poverty to children in care, to build up a picture of The Child of the North. It sets out 18 clear recommendations that can be put in place to tackle the widening gap between the North and the rest of England.

Recommendations from the report

The report authors have set out recommendations to tackle the inequalities suffered by children over the course of the pandemic. They include:

The report was initially launched in December 2021, and achieved widespread national media coverage and commentary, including Sky News, The Mirror, The Daily Mail, BBC News online and Press Association. It also achieved extensive regional coverage across Northern media including broadcast, print and online.

A full copy of the report can be found here 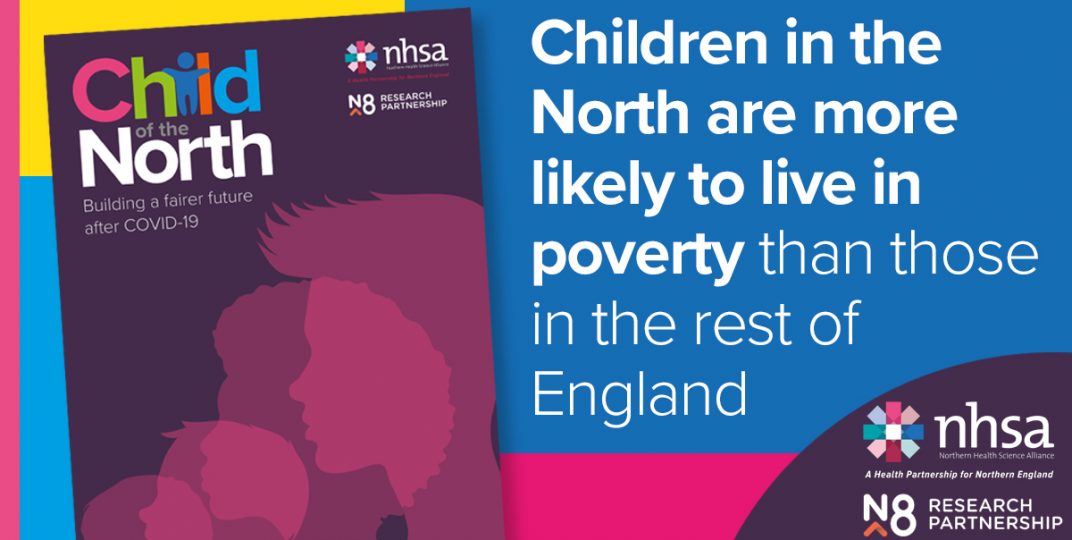