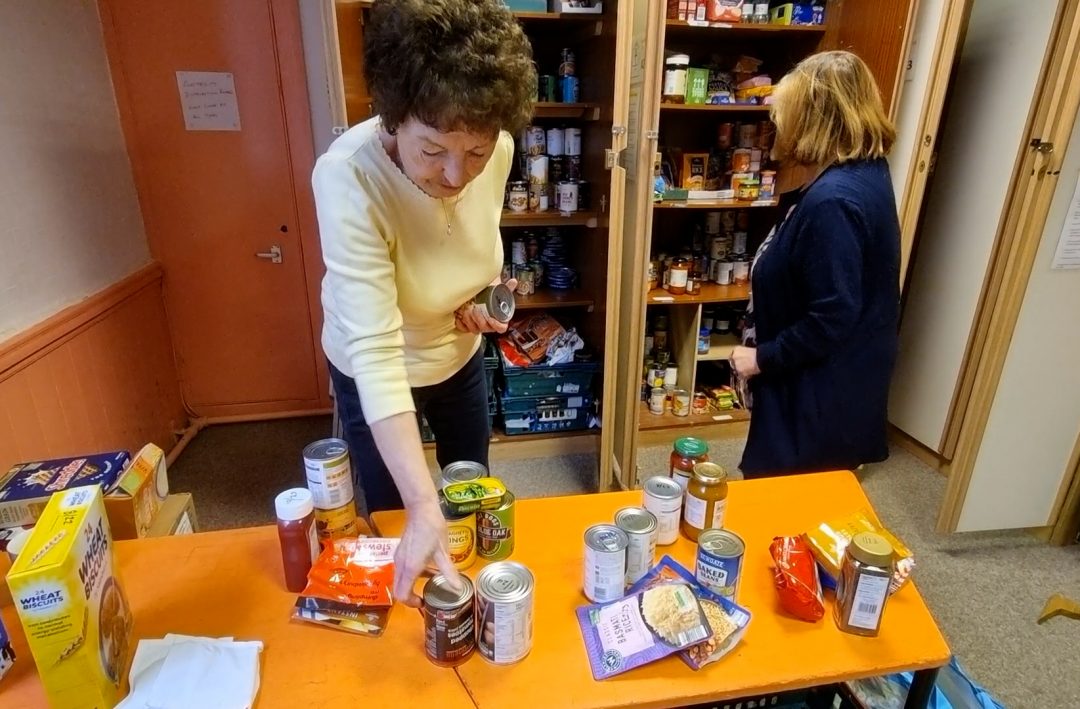 A new study led by researchers from Northumbria University has taken an in-depth look at the factors driving food insecurity in the North East.

The research findings have been illustrated in an impactful short film which captures the first-hand experiences of service providers trying to deliver food aid services whilst facing ever-increasing demand for their services, alongside a decline in food donations and increased running costs.

The study comes as figures recently released by the End Child Poverty Coalition showed that the North East has seen the biggest rise in child poverty in the country.

Food insecurity, sometimes referred to as food poverty, means a household cannot be sure they will have enough food in their household, or money to buy the food they need, to feed themselves and their family. Recent data from The Food Foundation shows that this is a significant issue – with some families selling their belongings to buy food.

Steep increases in poverty and child poverty in the North East are down to a number of factors, including the region consistently having the UK’s highest rate of unemployment and a prevalence of low paid work –with the area having the UK’s lowest weekly earnings.

Adding the current ‘cost of living crisis’ into the mix means that many households in the North East are facing the perfect storm.

As poverty figures rise, the number of households experiencing difficulties in meeting food and fuel costs increases, as does the number of people seeking support.

However, for organisations providing food aid, the rising costs of fuel and food have also increased, meaning they are also facing their own financial issues in providing their essential services.

“Our community shop applications increased from between 10 or 12 a month to 31 a month.”

“The cost of living crisis is having an impact on the donations. The (donation) bins aren’t as full as they used to be when we go and collect them.”

The research team worked closely and directly with food aid providers across communities in Redcar and Cleveland to get an in-depth understanding of what is driving the growing need for food aid – including foodbanks and community shops, as well as the increasing challenges facing them.

The researchers also worked with a Participant Involvement and Engagement group to co-produce a household food insecurity survey that was sent to residents in five Redcar and Cleveland wards.

The film produced as part of this research aims to highlight the first-hand experiences and challenges faced by service providers trying to deliver food aid services whilst facing increasing demands, a decline in food donations, and increased running costs.

The film also provides a summary of the need and challenges of measuring household food insecurity at the ward level.

“Making this film was a real eye opener. Research projects often focus on the service user rather than the experiences of the service provider. However, in terms of local food aid services the two are inextricably linked.

“Food aid services, whether food banks, community shops, or pantries are a lifeline for many households. These organisations are very knowledgeable about local need, yet as identified by all providers, including the council, there is a need to adopt a strategic approach to ensure that no household misses out.

“Everyone realises that food aid services don’t address the underlying cause of poverty but for many families they are the difference between eating or not.”

Why is this research different?

The UK Government does measure household food insecurity in the Family Resources Survey. However, this survey does not provide local authorities with the localised information they need to plan their own local food aid planning and services.

This research aimed to gain a better and more-in depth understanding of local (ward) level differences in household food insecurity responses and risks, to help public health practitioners and food partners to better serve their communities.

A significant issue in assessing the effectiveness of local interventions to tackle household food insecurity is the lack of measurement of household food security. This is at both council and ward level, as well as having a strategic overview of all services.

It is important to measure at a local level

Measuring at a local level would enable local authorities to strategically target areas of need and evaluate the impact of food related interventions on household food insecurity more effectively.

An unexpected finding was while the Index of Multiple Deprivation (IMD) is one of the most important predictors of food security at an overall level, it cannot predict food insecurity equally across the range of ‘low or very low’ food security. This research suggests that the reliance on the IMD could potentially lead to incorrect conclusions about the geographic distribution of food insecurity within local authorities.

At a local level there is a pressing need to understand the scale of food insecurity. There is also a need to understand who is at high risk, and what interventions work for whom, why and where? These may be cash based or food-based interventions. Local measurement of household food insecurity will help local authorities in answering these questions.

The project was led by Northumbria University, working with partners from Newcastle University, Teesside University and Redcar and Cleveland Council.

Colleagues from Northumbria University, the University of Liverpool and the University of Sheffield have since come together to form the FILL (Food Insecurity Monitoring at the Local Level) Consortium. In September 2022 the FILL Consortium produced a new policy brief –  ‘Time to meaure and monitor local food insecurity: The case for a harmonised approach across local authority areas’. The brief will be shared as part of an event hosted  by the Local Government Association in October 2022. You can download the brief below.

With thanks to the following groups in Redcar and Cleveland who gave their time to support this project:

Footprints in the Community Café

We would also like to thank the Independent Food Aid Network for their contribution to the making of the film.

The links below provide further context and information around poverty, child poverty and food insecurity in the North East and nationally

Breadline Voices: Some parents have sold their belongings to buy food | Food Foundation

Poverty 2022: The essential guide to understanding poverty in the UK -Joseph Rowntree Foundation

The relationship between austerity and food insecurity in the UK: A systematic review – Lancet Discovery Science, March 2021

As part of this work, the team have produced a Reseach Journey Map (shown below) to provide a visual representation of the process they undertook to conduct the research. You can download a copy of the Research Journey Map below. 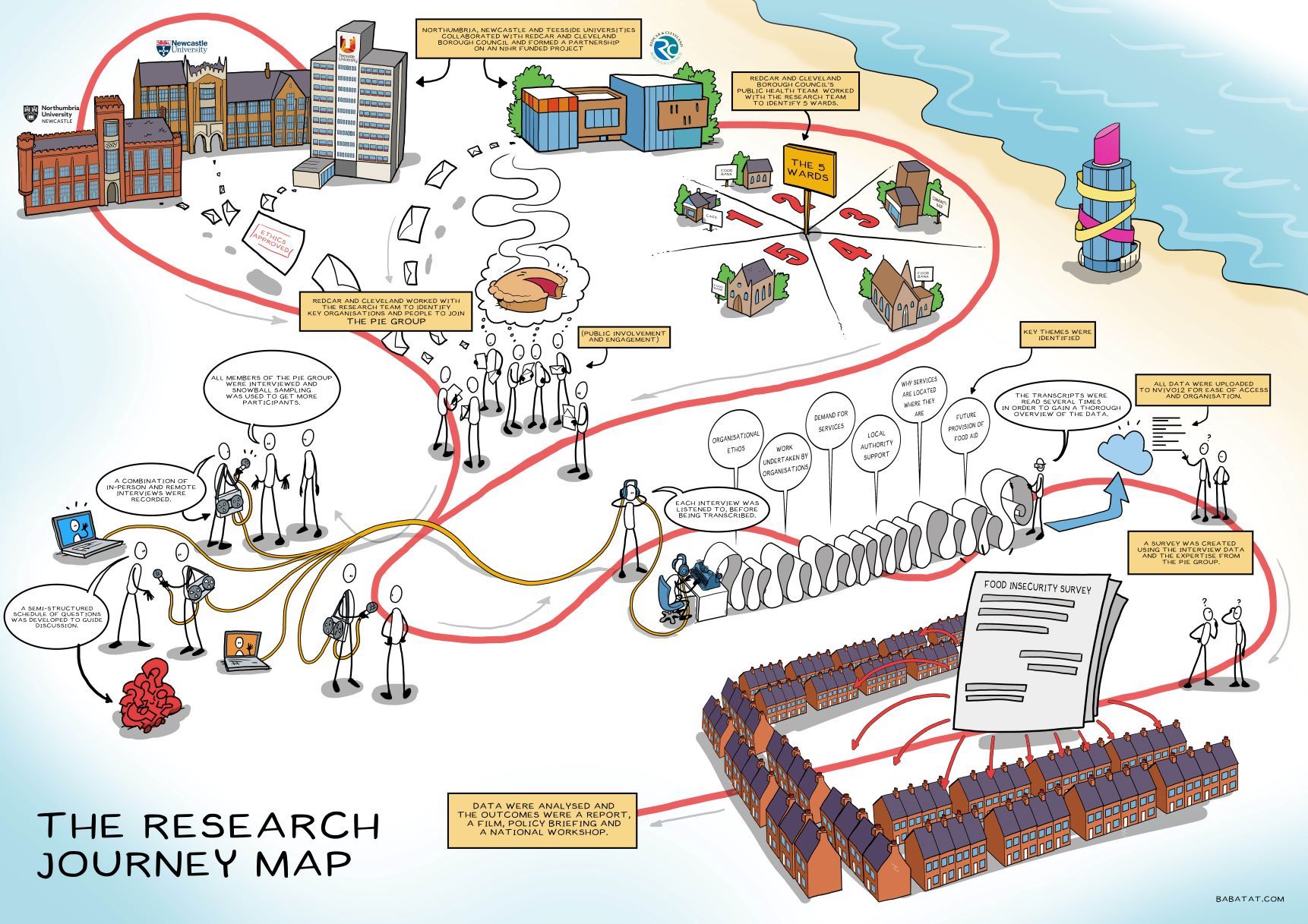